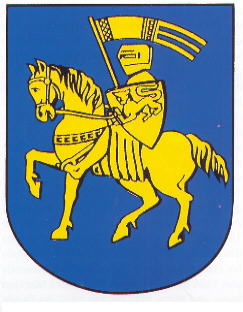 Schwerin probably already received city rights as early as 1177 and became the most important city in the region. The arms show a medieval knight holding a shield with a lion, probably showing the founder of the city, Duke Heinchich der Löwen (Henry the lion) of Sachsen and Bayern. The leopard is the lion of the Welfen family, to which the duke belonged. The image already appeared on the historical seals of the city, as shown below from a seal of 1298.

The arms of 1858 are nearly identical to the present arms, there are some differences in the shape and armour of the knight, and the lion is shown as a normal lion, not as a leopard as in the present arms. In 1939 the small shield was changed into the original colours of the Welfen family, see below. In 1991 the historical arms (in two colours) were restored again.