Per fess: in chief paly of six Or and Gules, in base Azure.

Above the Shield is placed a coronet suitable to a Burgh and thereon a Helmet suitable to their degree with a Mantling Gules doubled Or, and thereon is set for Crest issuing from a marquess's coronet Gules, a roe­ buck's head Or, attired Gules, and in an Escrol over the same this Motto "Veritas Vincit" and on a Compart­ ment below the Shield are set for Supporters two stags Or, attired Gules.

Stonehaven was made a Burgh of Barony in 1587 in favour of George Keith, 5th Earl Marischal of Scotland.

The Earl Maris­chal's Latin motto "Truth Prevails" has been retained.

Peterhead, also a Burgh of the same Earl Marischal, has a similar coat of arms. 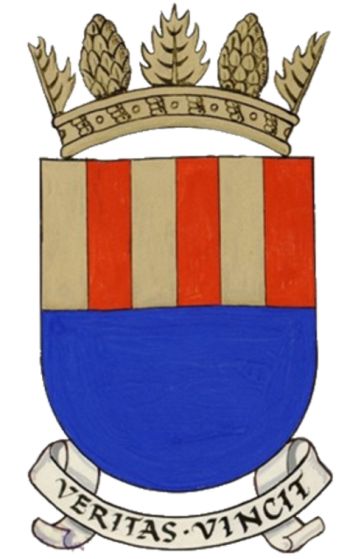 Per fess, in chief paly of six Or and Gules, in base Azure.

Above the Shield is placed a Coronet appropriate to a statutory Community Council, videlicet:- a circlet richly chased from which are issuant four thistle leaves (one and two halves visible) and four pine cones (two visible) Or, and in an Escrol below the same this Motto "Veritas Vincit".

These are the burgh arms without supporters and with a different crown.