From Heraldry of the World
Your site history : Stralsund
Jump to navigation Jump to search 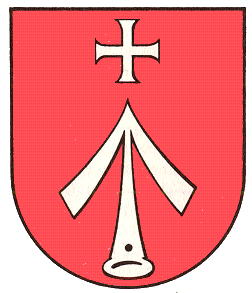 The arms were officially granted on September 9, 1938.

Stralsund was founded as Stralow and the arrow (Stral in German) is a canting symbol. The crown was added in 1720 by King Fredrik I of Sweden. At the same time a helmet with as a crest a golden cross between two blue wings as well as a golden lion and red griffin as supporters. The lion is the Swedish lion, the griffin is taken from the arms of Pommerania. These arms have been used since, although for daily use only the small arms are used.

The arrow as a symbol already appears on the first known seal of the city, which is known from 1265 and 1274. It shows a small boat under the arrow, as well as two swimming fish.
The second, and slightly larger seal dates from the end of the 13th century and shows the same composition. On this seal the boat is clearly largeer and there are more details as the seal is larger.

The composition of the great seals remains the same during the next century, in which the seals become more and more complicated, and the arrow loses its importance. The third seal shows a small arrow behind the mast of the ship, whereas on the fourth seal the arrow is removed altogether and can only be seen on the banner above the rudder.

On the smaller seals (secret and contraseals) the situated differs, here the arrow is the only symbol. The ship has disappeared from these seals. This situation is continued until the 18th century; the large seals show a ship, indicating the importance of the city as a trading port, whereas the smaller seals use the arrow. The arrow is at the time also used as arms of the city, but the colours are uncertain. Similarly, the arrow, sometimes accompanied by a cross, is used on the coins of the city.

All seals after 1720 show the new enlarged arms of the city. The blue and silver colours are also known since 1720 and may be derived from the Swedish arms. However, in 1938 the colour of shield was changed into red.