From Heraldry of the World
Your site history : Swansea
Jump to navigation Jump to search 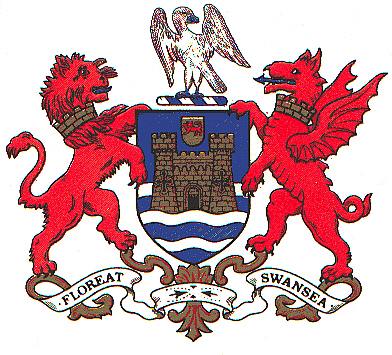 Arms: Per Fess wavy Azure and barry wavy of six Argent, of the first a double-towered Castle or, in Chief on an Inescutcheon of the third a Lion passant guardant Gules
Crest: On a Wreath of the Colours an Osprey rising holding in the Beak a Fish proper
Supporters: on the dexter side a Lion Gules gorged with a Mural Crown or, and on the sinister side a Dragon Gules gorged with a Mural Crown Or
Motto: 'Floreat Swansea'

The blue and white barry wavy part of the field shows that Swansea is a seaport. The castle is for the city's medieval fortifications - part of the castle still remains. The lion on the small shield is for the de Braos family. The crest has the osprey long associated with Swansea, and also found in West Glamorgan County Council's arms. The lion supporter is again derived from the de Braos arms, while the red dragon shows that the city is in Wales.

The early history of the arms of Swansea is obscure. An unfounded legend has it that the original device was an osprey, which forms the present crest. Between 1632 and 1922 Swansea's seal bore a portcullis of eight bars, probably derived from the arms of the Somerset family, Lords of Gower. The portcullis is also depicted on the maces of the borough, which date from 1753, and on other items of this period. This suggests that the portcullis was regarded as Swansea's insignia at this period.

In January 1843, the General Purposes Committee of the Council resolved to replace the portcullis with a design which had appeared on a seal of a document dated 1548. The seal was probably the ancient borough seal, and some historians have suggested that it depicts arms granted in 1306, by William de Breos, Lord of Gower, when he created the borough. The arms found on the seal can be blazoned:
Gules, a castle double towered argent, in the gateway a portcullis half-down or; on each tower a banner bearing the arms of de Braos, viz: Argent a lion rampant crusilly or. In chief on a shield or an osprey rising reguardant with a fish the tail end in its beak both proper.
These unofficial arms were used by Swansea from 1843 until 1922, and in the latter year were engraved on the seal.