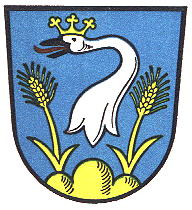 The swan's neck was the crest used by the Lords of Sinzenhofen, who had many possessions in the area from 1373-1548. The three mountains in the base symbolise the geographical situation, near the mountains of the Bavarian Forest. The two wheat ears symbolise the (former) agricultural character of the municipality.