From Heraldry of the World
Your site history : Vik
Jump to navigation Jump to search

The arms show three knives, used to cut leaves to feed the animals. This type of knife was typical for the area.

The old arms were adopted by the municipality on May 15, 1951, and were not coloured. 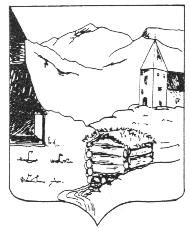 The arms show the highest mountain of the area in the background (Rambera), the wooden church of Hoprekstad and the stone church of Hove.