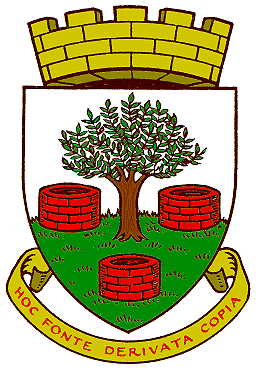 Arms : Argent, in base a mount vert, thereon an ash tree proper between three wells gules; the shield ensigned by a mural crown Or.
Motto: Hoc fonte derivata copia.

The arms are based on unauthorized insignia previously used. The wells of course refer to the name of the City and the tree, seems to be derived from that on an old seal, which depicted a tree with a stream springing from its roots.

The motto is a shortened form of one formerly used, namely: Hoc fonte derivata copia in patriam populumque fluit - 'Wealth, drawn from this spring, flows forth unto our country and our people.' This is a paraphrase of a passage from Horace, Ode 6, Book III.