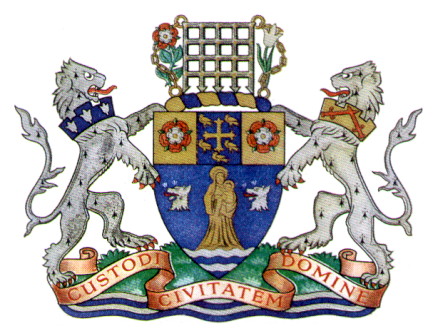 Arms : Azure between two Wolves' Heads erased argent and on a Base wavy Argent and Azure a female Figure affrontée vested and mantled and on her sinister arm a Child also vested around the head of each a Halo all Or on a Chief of the last a Pallet Azure thereon a Cross flory between five Martlets Or being the Arms of King Edward the Confessor between two united Roses Argent upon Gules.
Crest : On a Wreath Or and Azure a Portcullis Sable studded and chained Or between on the dexter side a united Rose the flower Argent upon Gules and on the sinister side a Lily both stalked leaved and erect proper.
Supporters : On either side a Lion Ermine the dexter gorged of a Mural Crown Azure charged with three Lily Flowers Argent the sinister gorged of a like Crown Or charged with two Swords in saltire Gules.
Motto: 'CUSTODI CIVITATEM DOMINE' - O Lord, watch over the city

The chief is identical to that used in the old Westminster arms. The portcullis in the crest is also taken from the old arms, but now flanked by two flowers, a Tudor rose and a lily, symbol of St.Mary.

The supporters remained from the old arms, but now they wear mural crowns around the necks for the two Boroughs merged with Westminster. The blue crown with crossed lillies is for St. Marylebone, the gold one with crossed swords for Paddington. The swords are derived from the arms of the See of London.

The motto is also taken from the old arms. 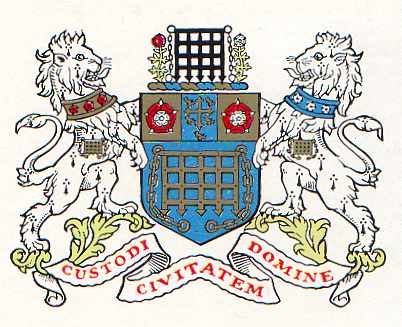 Arms : Azure a Portcullis Or on a Chief of the second a Pallet of the first thereon a Cross flory between five Martlets also of the second being the Arms of King Edward the Confessor between two United Roses Gules and Argent.
Crest : On a Wreath of the Colours Or and Azure a Portcullis chained Sable between on the dexter side a Rose Gules and on the sinister a Rose Argent both barbed seeded stalked leaved and erect proper.
Supporters : On either.Side a Lion Ermine that on the dexter gorged with a Collar Or thereon three Roses Gules barbed and seeded proper that on the sinister with a Collar Azure thereon as many Roses Argent barbed and seeded also proper and each charged on the body with a Portcullis chained Or.
Motto: 'CUSTODI CIVITATEM DOMINE' - O Lord, watch over the city

The arms were officially granted in 1601, supporters and crest in 1902.

In the centre of the chief are the attributed arms of King Edward the Confessor, founder of Westminster Abbey. The Tudor roses refer to thr Tudor dynasty who raised Westminster to City status, and established a palace there, which is now the seat of Britain's parliament. The portcullis is another Tudor badge, particularly associated with Westminster.

The ermine lions, the supporters of the arms of the Cecil family, were adopted in token of a family which has for centuries been closely associated with West­minster, Sir William Cecil, Lord Burleigh, Lord High Treasurer in Elizabeth I's reign, having been the City's first Lord High Steward, and his descendant, the Marquess of Salisbury, holding the same civic office at the time the supporters were granted.