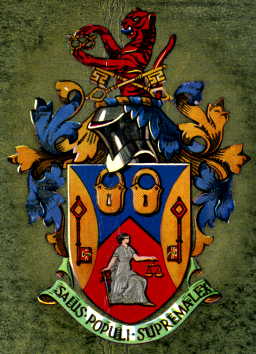 Arms : Per chevron Azure and Gules in chief two Padlocks Or and in base a Female Figure representing Justice proper seated and facing to the sinister habited Argent holding in the dexter hand a Sword proper pommel and hilt Or point downwards and in the sinister hand a Balance all between two Flaunches Or each charged with a Key Gules wards downwards and inwards.
Crest : On a Wreath Or and Azure in front of a demi Tiger Gules holding between the paws a Stafford Knot two Keys in saltire wards upwards Or.
Motto: 'SALUS POPULI SUPREMA LEX' - The welfare of the people is the highest law.

The keys and locks stand for the town's principal and historic industry. The figure of Justice represents the ideal of a local govermnent authority.

The lion and Stafford knot are from the arms of the County Council.