From Heraldry of the World
Your site history : Winnenden
Jump to navigation Jump to search 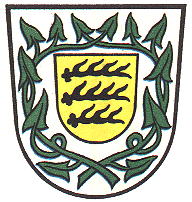 Winnenden was already in the 13th century a city and a possession of the Lords of Neuffen. In 1325 the city was acquired by Württemberg. The oldest seals date from 1333 and show the arms of Württemberg, the three deer antlers. In the 16th century the branches (Winden) were added as a canting element. This combination was used until the late 19th century.

In the 19th century new arms appeared, with a dice and the three antlers. First as two separate shields, later, in 1903, officially combined in a divided shield. The dice symbolised winning and thus were also a canting element.

The above arms were officially restored in 1961.