From Heraldry of the World
Your site history : Wittenberge
Jump to navigation Jump to search 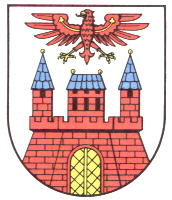 When Wittenberge received city rights is not known, but the city was mentioned as such in 1264. The arms are likely based on older seals, but the oldest known seal dates from 1633. The arms show the city with the eagle of Brandenburg, as the city was a possession of Brandenburg since around 1300. Between 1892 and 1927, when the present arms were adopted, there was a goose on the middle tower. This goose was taken from the arms of the Lords of Putlitz, who founded the castle in 1200, around which the city developed.