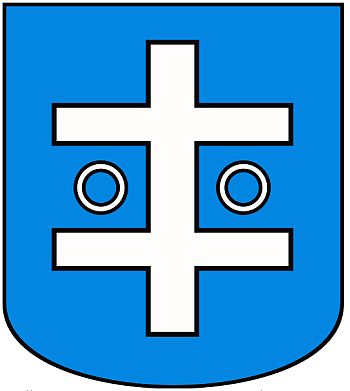 The arms were officially adopted on February 28, 1997.

The arms of the city (German name Fraustadt) show a double cross with two circles. The oldest known seal dates from 1310 and shows a Madonna with child on a throne and a motto "S. CIVIVM DE FROWENSTAT', the Madonna is most likely the patron saint as well as a canting element (Frau=woman, lady). A 14th century seal shows the Madonna next to a male person (God or bishop), and in the 15th century a small shield with the above arms is placed near the feet of the Madonna. On later seals the small shield becomes larger, whereas the figures gradually disappear.

The cross is the arms of the Jagellonian family dynasty, the meaning of the rings is not known. Until 1997 the arms were shown in red.