From Heraldry of the World
Your site history : Cleethorpes
Jump to navigation Jump to search 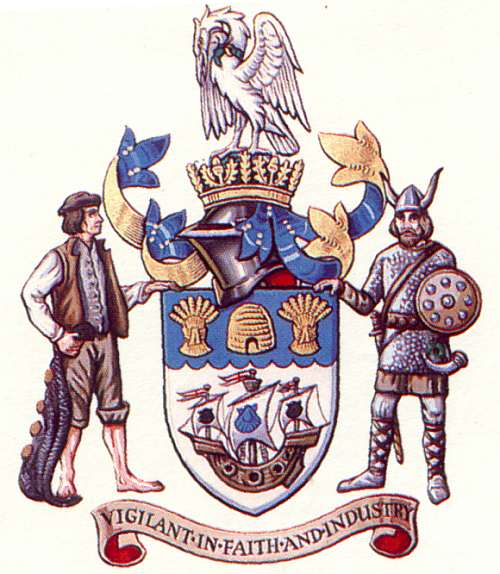 Arms : Argent an Ancient Ship of three Masts proper each flying a forked Pennon of St.George the Mainsail charged with an Escallop Azure and the fore and mizzin sails charged with like Escallops Sable on a Chief engrailed Azure a Beehive between two Garbs Or.
Crest : Out of a Coronet composed of Ears of Wheat and as many Acorns leaved set upon a Rim Or a Mount Vert thereon a Pelican Argent vulning herself Gules gorged with a Strap Vert buckled Or; Mantled Azure doubled Or.
Supporters : Dexter a Cleethorpes Fisherman holding in the exterior hand a Net all proper sinister a Norseman holding in the exterior hand a Shield all proper.
Motto: 'VIGILANT IN FAITH AND INDUSTRY'

The arms were officially granted in 1974.

In the new arms charges from the rural District arms were combined with those of the 1936 grant to form a new design.

The main charge is an ancient ship, for the district's ports, principally Immingham. The sails are charged with scallop shells, a blue one from Cleethorpes, and two black ones from Grimsby RDC's. The chief is engrailed like the bend in the old arms and is charged with a beehive between two garbs, showing the combination of industry and agriculture in the district.

To the crest has been added a rural crown, a form of crest coronet granted to rural district councils, from the Grimsby RDC crest. The mantling is coloured blue and gold, to suggest sea and sand. The supporters are the same as those granted in 1936, but have been moved to opposite sides of the shield for heraldic difference.

The motto combines Cleethorpes' "Vigilantes" with Grimsby RDC's "By Faith and Industry". 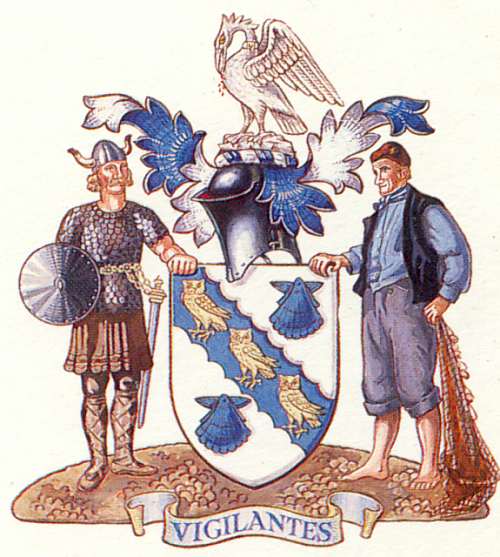 Arms : Argent on a Bend engrailed between two Escallops Azure three Owls Or.
Crest : On a Wreath of the Colours upon a Rock a Pelican Argent vulning herself Gules gorged with a Strap also Argent Buckle Or.
Supporters : On the dexter side a Norseman holding in the exterior hand a Shield and on the sinister side a Cleethorpes Fisherman holding in the exterior hand a Net all proper.
Motto: 'VIGILANTES' - Watchful

The arms were officially granted on September 8, 1936.

Before 1936 Cleethorpes used an official coat of arms featuring a silver shield with a blue bend charged with three gold owls. The shield was ensigned by a blue scallop shell.

In 1936 an official grant of arms was made. The shield combined the unofficial emblems, while making the edge of the bend engrailed, resembling the arms of Sidney Sussex College, important local landowners.

The crest is a pelican, from the arms of the Earl of Yarborough. Around the bird's neck is a leather strap from the arms of the Pelham family. The strap commemorates the capture of the King of France by Sir John Pelham at the Battle of Poictiers. The supporters represent the Viking foundation of the town, and its traditional fishing industry.