From Heraldry of the World
Your site history : Hartberg
Jump to navigation Jump to search 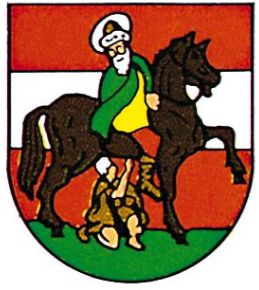 St. Martin is the patron saint of Hartberg. The arms show him meeting the beggar, for whom he divided his own coat afterwards.

The city was founded in the Middle Ages (first mentioned as a city in 1286) to protect the road over the Wechsel mountain pass, which links (or separates) Lower Austria and Styria, and also the Eastern border of Styria.

The arms also contain the Austrian arms, Gules, a Fess Argent. This symbolises the importance of the pass road between Styria and (Lower) Austria. These states were independent countries in the Middle Ages.

The arms with the beggar already appear in the seals from the 14th century and also in the book by Bartsch in 1567. In the 1570s the town and region were sold to the Paar family, whose arms contained a crowned eagle in the second and third quarter. The city therefore used an eagle as arms until 1947 when the old arms were officially restored.