From Heraldry of the World
Your site history : Haugesund
Jump to navigation Jump to search

These arms show three seagulls, again a symbol for the sea. The gulls were also seen in the upper part of the old arms, where they were added mainly as decoration. The number three was also continued. Herring fishing was no longer the main source of income in 1930, hence the herring barrels were removed. 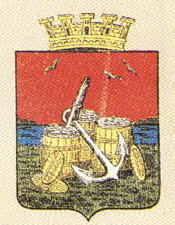 The arms show three herring barrels and an anchor, indicating the importance of herring fishing and processing in the town. The three barrels also represented the three parts of the municipality, the mainland and the islands of Hasseløy and Risøy.