From Heraldry of the World
Your site history : Mariazell
Jump to navigation Jump to search 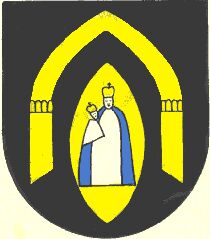 Mariazell is the most famous place of pilgrimages in all of Austria and the neighbouring countries. It was the national shrine of the Austro-Hungarian Empire and to this day attracts pilgrims from many countries. Since the basilica of Mariazell is dedicated to Our Lady, it is fitting that She herself appear in the coat of arms, her Son on her arms, dressed and crowned regally, surrounded by the golden mandorla.

The portal dates from the gothic age and can be seen at the basilica.