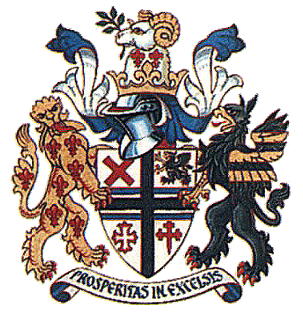 Arms : Argent two Bars Azure overall a Cross Sable in the first quarter a Saltire couped Gules in the second quarter a Griffin segreant Sable beaked and armed Or in the third quarter a Cross flory Gules voided and in the fourth quarter a Cross crosslet fitchy also Gules.
Crest : Issuing from an Ancient Crown Or a Ram's Head Argent armed Or charged on the neck with two Fleur de Lys Gules and holding in the mouth a Slip of Laurel proper; Mantled Azure doubled Argent.
Supporters : On the dexter a Lion guardant Or charged with seven Fleur de Lys Gules and on the sinister a Griffin Sable armed Or the wings barry of seven Sable and Or.
Motto: 'PROSPERITAS IN EXCELSIS' - Flourishing well.

The main design is based on the older arms of the Borough of St. Helens, see below. On the main shield a new item is the cross in the third quarter, which is the derived from the arms of the Pilkington family, and represents Windle. The cross in the fourth quarter represents Billinge. The crest and sipporters are new addition to the arms. The crest above the helmet is that of Lord Newton representing Newton U.D.C. and Haydock U.D.C. The crest is suitably differenced by the inclusion of two red fleur de lys on the body of the Ram which is issuant out of a ducal crown of gold.

The supporters, a golden lion and a black griffin are differenced by 7 red fleur de lys on the lion and 7 gold and black bars on the wing of the griffin to denote the 7 constituent authorities which make up the Borough.

The motto "PROSPERITAS IN EXCELSIS" is taken from the Rainford Council badge of office and means "Flourishing Well". 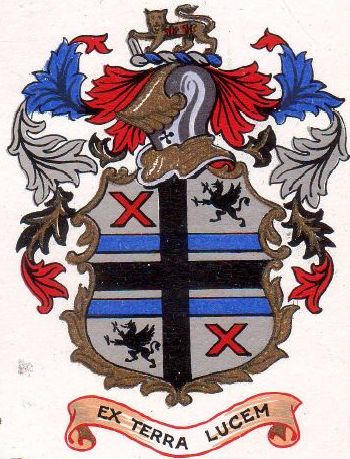 Arms : Argent two Bars Azure over all a Cross Sable in the first and fourth quarters a Saltire Gules and in the second and third a Griffin sergeant of the third.
Crest : On a Wreath of the Colours a Lion passant guardant proper charged on the body with two two Fleurs-de-Lys Gules resting the dexter fore paw on an Ingot of Silver.
Motto: 'EX TERRA LUCEM' - Light out of the earth.

The lion the is from the crest of the Walmsleys and the two fleurs-de-lys refer to Sir David Gamble, first Mayor and benefactor of the town, and the Haydock family.