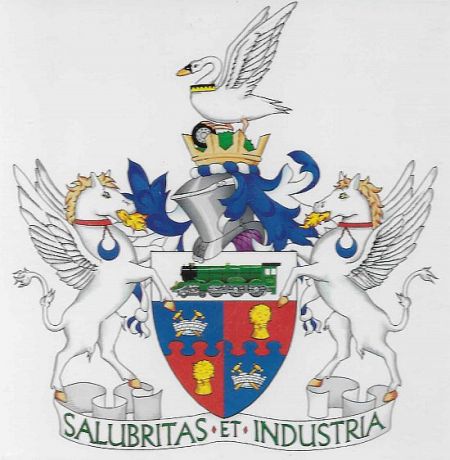 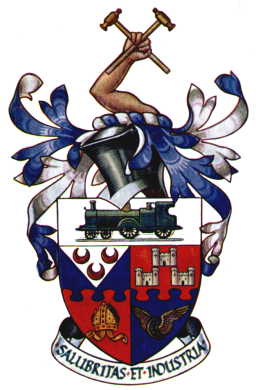 Borough (1974): Arms : Quarterly per fesse nebuly Azure and Gules a Pile Argent thereon three Crescents of the second in the first quarter three Castles one and two of the third in the second a Mitre Or in the third and a winged Wheel of the last in the fourth a Chief also of the third thereon a Locomotive Engine proper.
Crest : On a Wreath of the Colours a dexter Arm embowed proper grasping two Hammers in saltire Or.
Motto: 'SALUBRITAS ET INDUSTRIA' - Health and industry

The arms for the borough were officially granted on September 23, 1901.

The Great Western Railway engine 'Lord of the Isles' speaks for itself as alluding to the industry to which Swindon owes its rise.

The three silver crescents are a prominint feature in the arms of the Goddard family, who have held the Manor of Swindon since 1560, and indicates the close connection of the Goddard Manor with the Borough of Swindon.
The three castles are likewise a prominent feature in the arms of the Vilett family, who for a long period held the Manor upon which a considerable portion of New Swindon was built.

The mitre symbolises Odo, Bishop of Bayeux, who after the Norman Conquest was granted the Manor of Swindon by his half-brother, William the Conqueror.

The winged wheel denotes motion, or the swiftness of railway travelling. This quarter may be taken to represent modern Swindon.

The hand holding hammers symbolizes mechanical industry, to which modern Swindon owes its position. The hammers are golden to typify the prosperity which results from all well-applied industry.

Literature : Scott-Giles, 1953 and image from http://www.civicheraldry.co.uk