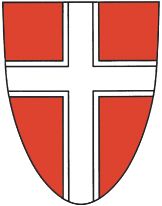 At the end of the 13th century the city also used already the arms with a cross, but not on its seals. A coin issued in 1278 shows 4 shields with the cross. The cross itself is probably a reference to the crusades, to which the people of Wien also participated. It may also simply be a symbol of religion in general. The colour of the cross, silver in red, is known from a book from 1395 and has not changed since.

The Dukes of Babenberg joined the crusades and fought on the battle of Acco in 1191. According to legend, Duke Leopold was the first to scale the walls of the city, with his white tunic completely covered in blood, except for under his belt. The silver bend on red thus became the arms of Austria. The city used seals with the Austrian arms from 1360 until the 17th century, but only to seal documents dealing with the transfer of land. This probably indicated that the land was a possession of the Dukes of Austria and the city acted as its representative.

The first combination of the arms with the cross and the eagle appeared on a seal from 1327. This seal was used during the whole 14th century in different variants, see examples below.

On September 26, 1461 Emperor Friedrich IV granted the city the use of the imperial double headed eagle and Imperial crown. The shield with the cross was not mentioned. The eagle was, for political reasons, not described as the Imperial eagle, but as just a double-headed eagle. As in 1463 the city was lost for the Emperor during the war of succession in Austria, the Emperor retracted all privileges to the city, including the arms granted two years earlier. All rights of the city were transferred to the city of Krems-Stein, which still uses the arms.

After the privileges were lost, the city made peace again with the emperor in 1465 and showed on its seal the double eagle with the cross on its breast. Whether these arms were officially granted, or simply assumed by the city is not known.

The arms with the eagle and cross in a single shield have been used until 1925. The shape of the eagle, the presence of the crown and other smaller details have differed widely during the centuries, but the basic composition remained the same. In many cases the cross appeared without the eagle as arms of the city as well, but on the official seals the eagle was always present.

After the end of the Empire in 1918 the country abolished the double-headed eagle as the symbol of the Emperors, but the city did not immediately follow. In 1925 the city council debated on the use of the old arms and finally in February the council decided that the official arms of the city of Wien were a silver cross in red. In an additional decision it was stated that the arms could be placed on a single-headed eagle. In 1934, the new commisionner of the city of Wien issued a new law, stating two official arms for the city; the small arms with only the cross, and the large arms, which showed again the double eagle, with crown, similar to the arms before 1925. In 1938 the small arms were abolished and now only the arms with the double-eagle were official. In 1945 the city again returned to the arms of 1925, and the arms were now again officially only the cross, but a single-headed eagle can be used as supporter. At present the supporter is not or very rarely used.

The city of Vienna is divided into 23 districts or "Bezirke", usually referred to by Roman numerals (Wien I through Wien XXIII) and/or their respective official names, such as "VIII. Josefstadt" The names of the districts derive from formerly independent suburban villages or from former parishes. Each of today's districts is composed of several independent villages or parishes, so with the exception of Wien I and XXIII, all arms are compound arms.

The arms of the Districts (Bezirke) of Wien :

The arms of Wien I : Innere Stadt are identical of those of the city as a whole, as until the mid 19th century the jurisdiction of the city was no more than the present district I. 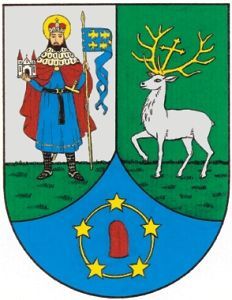 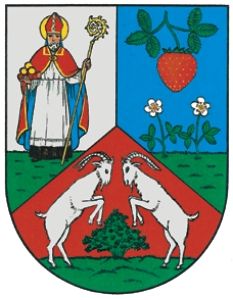 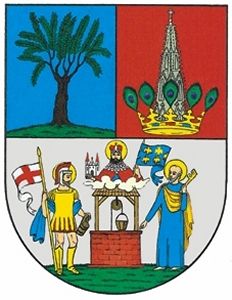 The arms of the Wien IV, Wieden, in their present shape were created during the late 19th century and combine the arms of the three communities Wien-Wieden, Wien-Schaumburgergrund and Wien-Hungelbrunn. 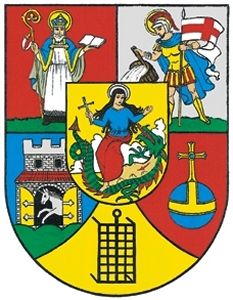 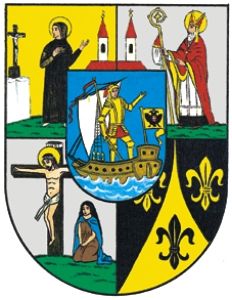 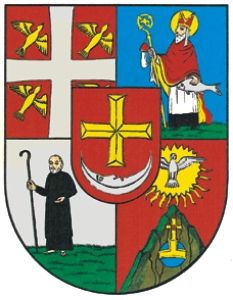 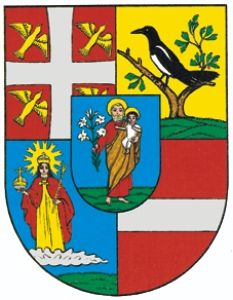 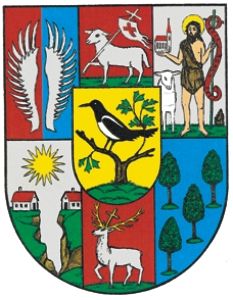 The arms of the Wien X, Favoriten, combines the arms of Wien-Favoriten with symols of other parishes. Oberlaa is symbolised by the water fountain that refers to the spas at Oberlaa. The term "Laa" meant an area covered with bushes in Middle High German and was first documented in 1182/85. /85.Rothneusiedl is represented by a red brick furnace and refers to the development of the area though the brick industry on Wienerberg and Laaeberg hills in the 19th century. The name means "New Settlement" ("Newsidel", 1301), the term "Roth-" (red) either referring to the sometimes reddish soil or to the brick constructions. Unterlaa is symbolised by the Maltese Cross. The Order of the Knights of St John, commonly referred to as "Maltese Order" bought the grounds in the late 13th century and built a church and a hospital. Inzersdorf-Stadt shows a grape of wine with three golden ears of corn, referring to the vineyards and the agriculture that prevailed here since the Middle Ages. The name "Inzersdorf" goes back to the 12th century ("Imicinesdorf") and probably refers to the founder (one "Imice") of the village ("Dorf"). 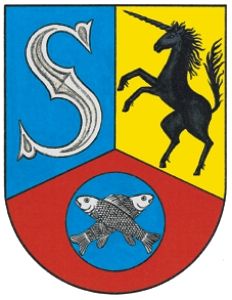 The arms of the Wien XI, Simmering, combine the arms of Albern, Wien-Simmering and Wien-Kaiserebersdorf. Albern got its name for the extensive woods of white poplars (Populus alba) found in this area (documented 1162). The two fishes symbolise the fishermen's craft that had a long tradition in Albern. 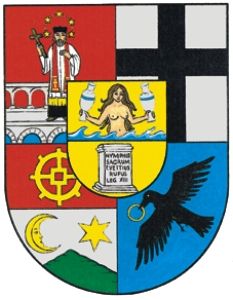 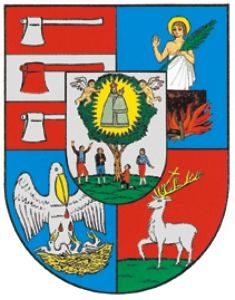 The arms of the Wien XIII, Hietzing, combine symbols of Wien-Hietzing, Hacking, St. Veit, Wien-Speising and Lainz. Hacking is represented by the three axes, "Hacke" meaning "axe". Sankt Veit is represented by St Vitus, the patron of the parish, with the traditional attribute of the kettle in which he is said to have suffered martyrdom by being boiled in oil. Lainz is symbolised by St. Hubertus' deer with the cross between the antlers, the design referring to the former Imperial Hunting Reserve at Lainz. 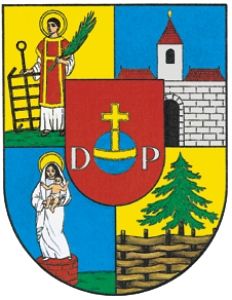 The arms of the Wien XIV, Penzing, combine the arms of Wien-Breitensee, Wien-Hütteldorf, Wien-Unter-Baumgarten and Wien-Penzing. Hadersdorf is represented by St Mary with the Child, patroness saint of the Mariabrunn parish whose symbol was taken over when the community of Hadersdorf-Weidlingau was founded in 1851. 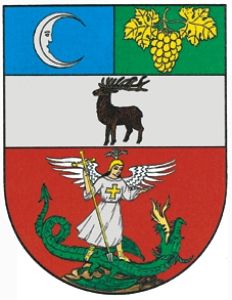 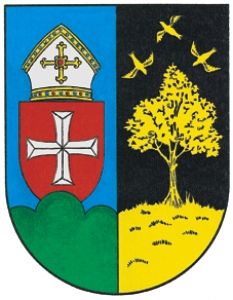 The arms of the Wien XVI, Ottakring, combine the arms of Wien-Ottakring with those of Wien-Neulerchenfeld. 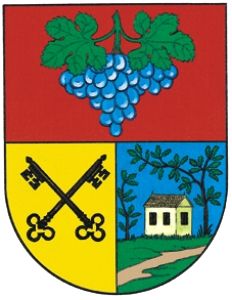 The arms of the Wien XVII, Hernals, combine the arms of Wien-Hernals, Wien-Dornbach and Wien-Neuwaldegg. 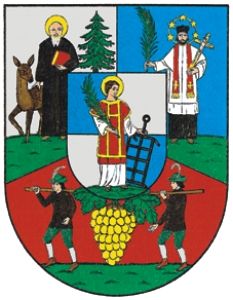 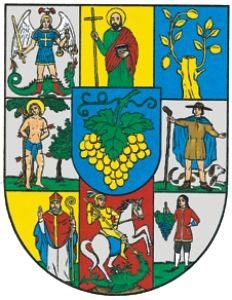 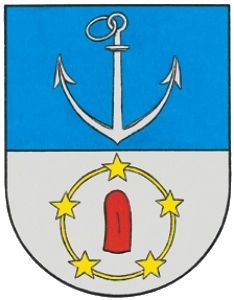 The arms of the Wien XX, Brigittenau, combine the arms of Wien-Brigittenau with those of Wien-Zwischenbrücken. 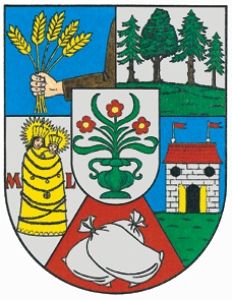 The arms of the Wien XXI, Floridsdorf, combine the arms of Wien-Floridsdorf, Wien-Leopoldau Wien-Jedlesee, Wien-Strebersdorf and Wien-Grossjedlersdorf. Stammersdorf is represented by one deciduous and three fir trees. The mighty trunks ("Stamm") of the trees are a reference to the area's name. 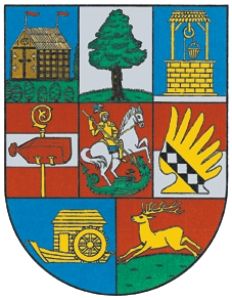 The arms of the Wien XXII, Donaustadt, combine the arms of Wien-Aspern, Wien-Stadtlau, Wien-Hirschstetten, Wien-Kagran, with symbols for the other former villages. Süßenbrunn is represented by a golden well on blue. Originally, the settlement was just named "Brunn" (= well), however, during the late Middle Ages it was referred to by the name of the land owner, one Mr "Siehs" or "Süß", so the name should translate into "Siehs' Well". ".Breitenlee is represented by a book in a pouch and a crosier on the Austrian shield. The arms are derived from those of Schottenstift abbey who still owns and runs a manor and agriculture in Breitenlee. "Preitenlee" was first documented in 1200, the name deriving from a natural dam of one arm of the Danube. From this "Lee" (= hill), the name of the community was derived. Eßling is represented by a golden eagle wing derived from the arms of the Lords of Eslarn. The name was first documented as "Eselaren" in 1250/60, since 1590, it has been called "Essling". The name originates either from a family name ("Ezelaren") or from a settlement where donkeys ("Esel") were used or traded. Kaisermühlen is represented by a golden water mill in blue. Name and arms refer to the mills on the Danube that were imperial property ("Kaiser-Mühlen" "= "="Emperor's Mills"). 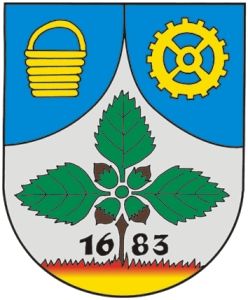