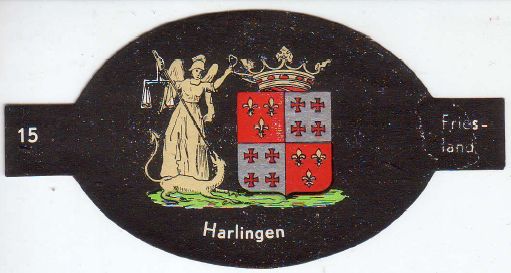 The Newa (Nederlandse Wapens, Dutch arms) series were issued around 1948. They were used on cigars, but were also sold in small packages. They could be collected in special albums. Click here:File:Newa-folder.pdf for a small promotion leaflet of the bonds (in Dutch). The aim was educational; to increase the knowledge of topography and history for primary school children. For this also a special song was issued with the bonds, see below.

The idea was to issue bonds for all arms ever registered in the country; but after approx. 1 year the programme stopped. Albums for two provinces were issued; Zuid Holland and Noord Holland, neither are fully issued. The series for nearly all other provinces remained incomplete and no albums were issued. The albums were reprinted at least once, as there are two different albums for both Zuid- and Noord-Holland. The type 2 albums are slightly larger and the position of the bonds in the albums is different. In the type 1 albums the shape of the bonds is outlined, in the type 2 albums there is only a small horizontal line to glue the bonds.

The bonds were issued by the Verkoop-centrale "Steeds Bereid" in Leiden. I have no further information about this company, except that is was re-established in 1944 and originally dealt with scrap metal. The albums were printed at Reiman Jr. in Amsterdam (type 1) and De Sleutelstad in Leiden (type 2).

There are many (slight) misprints known of the bonds in all provinces. Some more extreme are shown below:

As many numbers have not been issued, the bonds are listed alphabetically by province. The provinces are listed by number of bonds issued.

Estates and other arms: